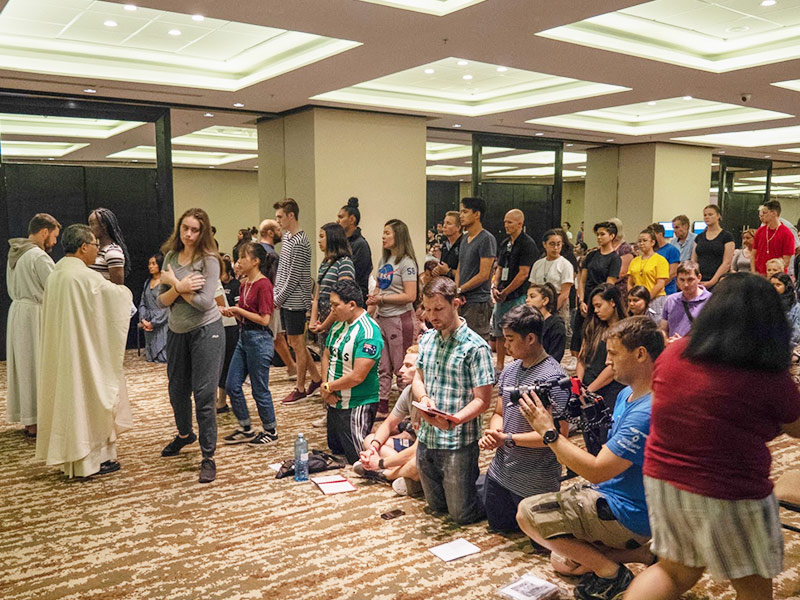 Coming together in Mass at the hotel in Panama City.

On the 16th of February I set out on a pilgrimage to attend World Youth Day alongside 171 other pilgrims from the Parramatta Diocese. It would first lead me to Mexico, Panama and then Houston before I would return home. I chose to go on this pilgrimage to help me better understand where my faith fits into the world at large and what better place to learn than a place where countless numbers of pilgrims from across the world gather together in worship. It was a chance to find Jesus outside of what I am familiar with.

Throughout the trip we joined together in prayer, said the rosary, the Angelus. We celebrated mass in hotels, airports, stony carpaks, open fields, churches and cathedrals. These experiences quickly drove home that the place doesn’t matter, it is the people that make the experience and live the Message. 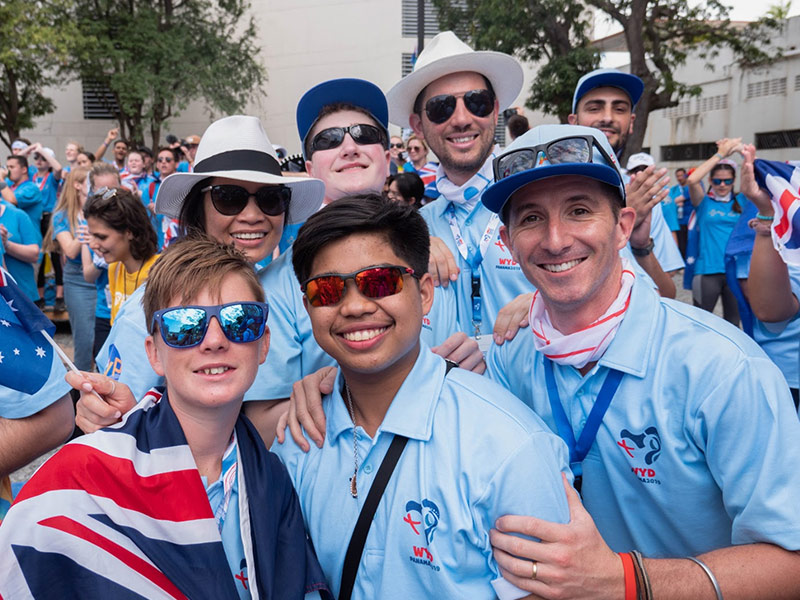 My group and myself attending the first catechesis event.

The connections we made with people in Mexico were a big part of the pilgrimage. Some of us visited ‘Hermanas de la Caridad Puebla’. Run by the Sisters of Charity it is a house for the elderly who have been abandoned to get something to eat a meal and celebrate their faith. It was here that we were not greeted as strangers or volunteers but as family. I was lucky enough to celebrate my birthday during that visit and was told, through a sister who spoke english, that everyone there had to sing a birthday song to me. No negotiations allowed! So I enjoyed my Mexican ‘Happy Birthday’ but what happened after was truly special. Each person there, who had seen hardship I would not begin to understand, then approached me, shook my hand and gave me a hug. I’m a person that would only be in their life for a few hours yet they showed me the same kind of love that families or close friends would show. It was here, through the genuine actions of people who had been abandoned by others, that I saw Jesus. My group leader, Scott, said it best “We came expecting to serve food and minister to the community here, but we have been nourished by the experience.” Though I like to think that we made an impression by teaching them how to sing ‘Waltzing Matilda’. 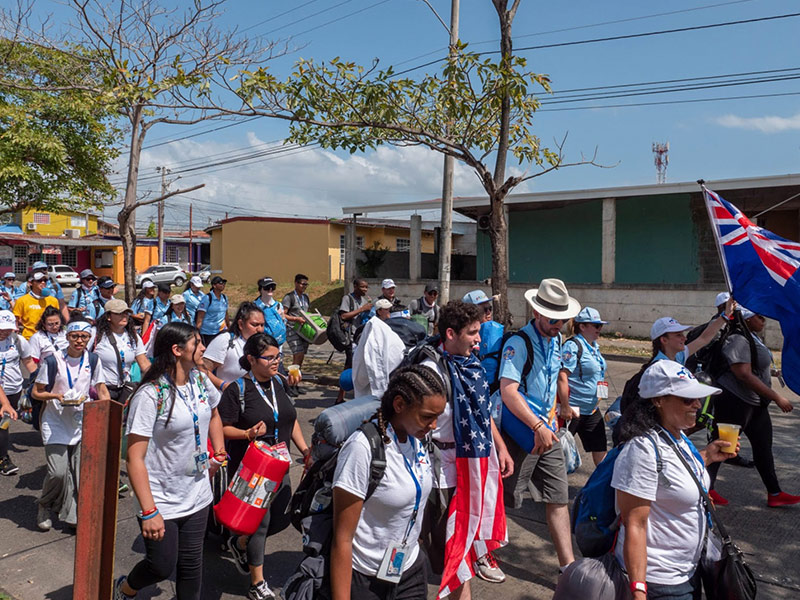 I had the pleasure to talk to a US/Canadian man and discuss the differences between Australia and Canada.

Arriving in Panama, we started the lead into World Youth Day with catechesis in the mornings, joining in a variety of english speaking events throughout the city in the afternoons and ending the evenings with larger events where all the pilgrims joined together. These evening events provided further opportunities to connect with people and see Jesus through them. The opening mass, said by the Archbishop of Panama, was the first big event where each nation proudly waved their flag but still came together as one Church. I visited as many different people from different countries as I could so I could introduce myself and even share a quick prayer (the Hail Mary is a good one to share!). I was surprised to see the Japanese flag being waved there since only half a percent of the population are Christians. I couldn’t pass up the opportunity to practice my Japanese as well and quickly introduced myself. 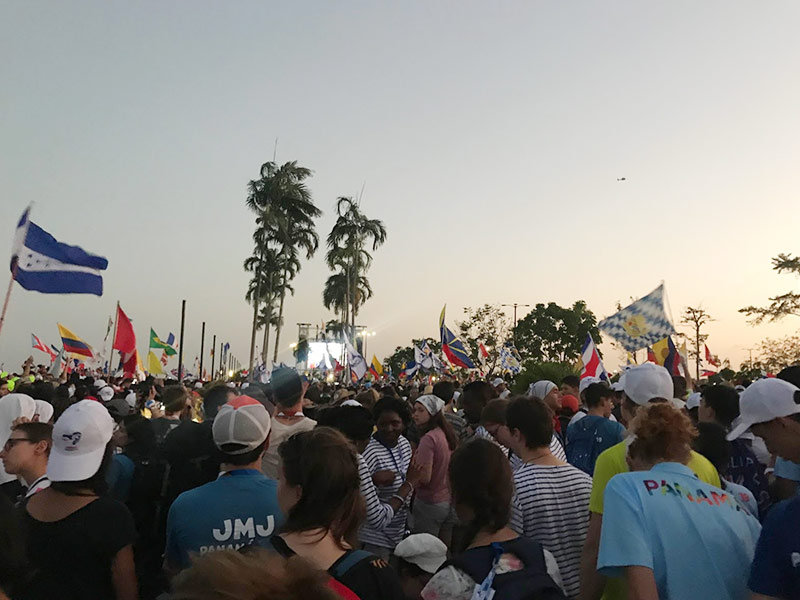 A small glimpse of the many nations present at the opening mass.

Later, as we said mass together in our own languages, there was a profound experience. I shook the hands of the people around me, said “Peace be with you” and knew they were wishing the same to me even if I didn’t understand the words they used.

Lastly, Pope Francis. His presence and calm yet firm voice and message left a lasting impression. Throughout the pilgrimage the group I travelled with were determined to catch a glimpse of our Pope! We went to the Stations of the Cross early and sat down along some barriers that we figured was a route for him to travel. He didn’t use that route, sadly, but each of us got to see him closely when we least expected it! My favourite story was from a group member that saw the Pope drive by while they were returning from the toilets. In the end, it wasn’t seeing the Pope that stays with me but what he called for us to do. After the Stations of the Cross he addressed the faithful and asked them to be like Mary and place ourselves at the foot of the Cross. She placed herself there to share Jesus’ suffering and did not turn away from it. It shows us the strength she had from the moment she said “Yes” up until Jesus’ death. In reflection of what the Pope has asked of us, I hope that I have even a small amount of courage that Mary has shown us. 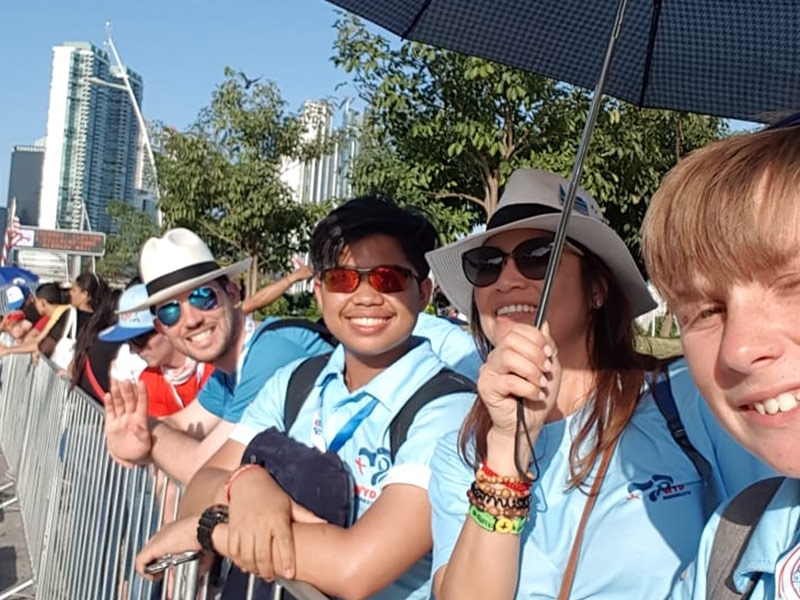 My group and myself waiting, hoping to catch a glimpse of the Pope at the Stations of the Cross.

Send us an email